Just some random pictures of our Halloween decor!  I tend to change it up every year and keep it interesting!  We did the rope spiderweb for the first time thanks to Martha Stewart!  Directions are in her Halloween issue this year.
You might also notice the small white card behind the mum.  We've been Boo'ed!  It's a fun neighborhood tradition.  Details are here on my neighbor/friend, Amanda's blog.  http://www.myheartsdesireblog.com/2011/10/boo-your-neighbors.html 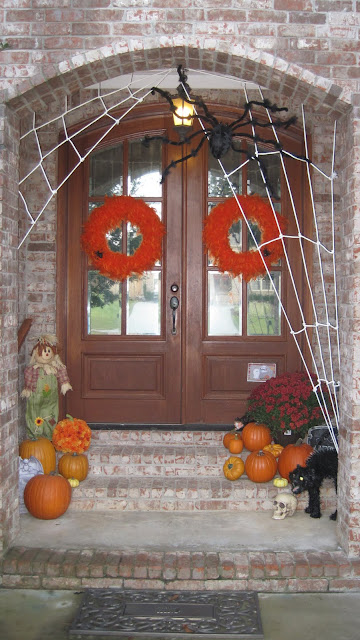 When we moved to Florida in July 2011, we would jog around our neighborhood and I saw this fiber optic cat on a neighbor's front porch!  I KNEW I had to have one!  I didn't steal theirs but found this one at Eckerd Drug!  (Do they still have those stores?)  It's 11 years old and still works like a charm!!
There are also tombstones, pumpkins and a toothy rat which spent the first part of it's life with us as the mascot of John's lab at UGA.  (I will spare you the picture....) 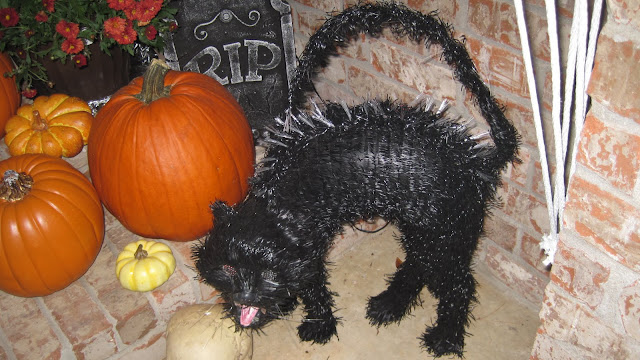 Last year I got this Halloween tree and the boys absolutely love it!  I spent quite a bit of time last Sunday hanging our ornaments in the perfect spot only to have the boys rearrange it every afternoon after school!  But that is what makes it fun---it's totally kid decorated!! 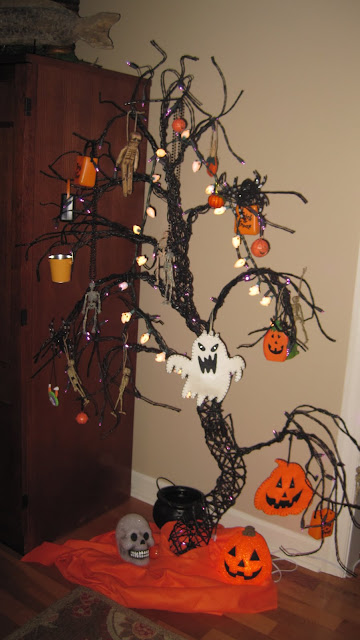 We had some new additions this year to the tree.  While we were in Santa Fe over spring break, I bought several Day of the Dead skeletons to add to the mix. I got them at the coolest store in the world called the Jackalope!  (http://www.jackalope.com/).  Uh-oh, didn't know they have an online store....... 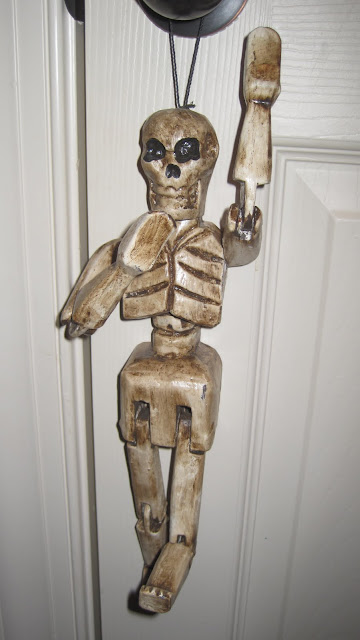 And every time I walk by this dude, the boys have positioned his arms and legs in different ways---but he's always waving (Guess he's friendly)!!!
Posted by Kennita at 7:51 PM 1 comment:

It's that time of year again!!

I love decorating for Halloween.  But I don't just put it all up at once.  I do not start until October 1 and I slowly add items until about 2 days before Halloween.  I was trying to think of something funky to put on the doors this year.  I had seen feather wreaths for other holidays but I am way too conservative for that---but anything goes for Halloween in this house!  I got online on Thursday afternoon (Yes, September 29---nothing like last minute) and ordered 6 orange feather boas.  I thought I would have a couple of days to get my other supplies lined up but the boas arrived on Saturday!!!!  2 DAYS!!  (Yay for:  http://partyfeathers.com/v1/)  You can also get these at Hobby Lobby and party stores.  Ebay is another place to check out.  I needed 6 just alike and thought ordering online would save me from driving from store to store. 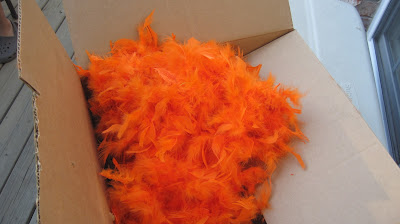 I ran over to Walmart to pick up two straw wreaths or some foam wreaths and, of course, Walmart didn't have either.  (Don't get me started on Walmart.... if it wasn't 2 1/2 minutes away, I would boycott the place!)  I ended up buying two pieces of foam core with a hope it would work!
Evan helped me cut the foam core into the biggest circles it would allow. 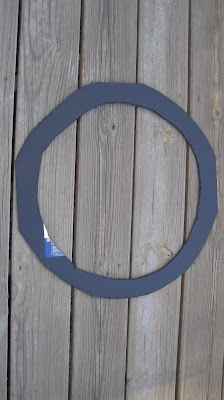 We started wrapping the boas around each circle.  We hot glued the ends and kept on going!  (Clothes pins were handy to hold everything in place before we glued.) 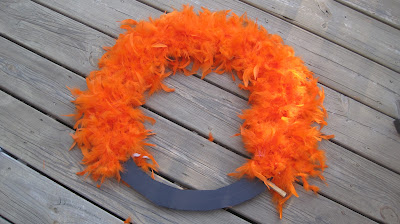 And we added a little fun!! 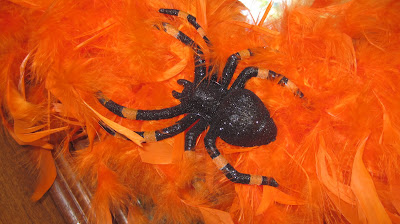 So, this is it for now!  Just some wreaths.  Got to get some more pumpkins tomorrow.  No telling what it will look like on October 31!  You will just have to check back! 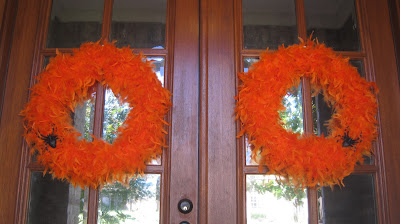 I also want to throw this picture in there!  I completely forgot about this until the morning of October 1.  I was awake about 3 minutes and ran around scrambling to fill it!  I was totally busted but the boys didn't care!!  This is the 5th year we have used this--another one of my projects!  So, only 9 more years for Evan!??!  I don't think he wants to stop any time soon!  Me either! 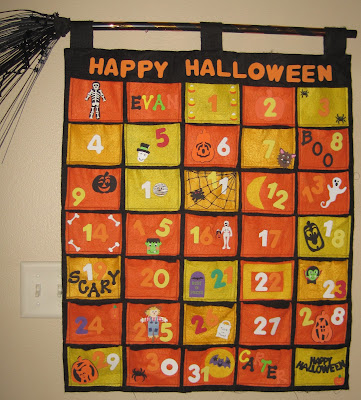 I have loved those fake plastic/foam pumpkins that craft stores have had for several years now.  When we lived in Florida, real pumpkins did not last very long due to high heat and humidity.  After shoveling several of them from the porch, I was so happy to find an alternative!  I bought several fake ones in Florida and they have lasted for years and I literally "toss" them in the attic at the end of the fall season!

I have been a subscriber to Lowe's FREE "Creative Living" publication for many years too!  During that time, I have used that magazine for inspiration for many of our projects.  This year's fall edition had the cutest idea for real pumpkins and real mums.  See here, page 10:  Lowe's Creative Living  The magazine states that the pumpkin should last about 3 days but I was not willing to invest my money or time for something so temporary.

I ran to HoLo and bought 3 large bunches of mums that were on sale (of course) and then to Michaels for one of their fake pumpkins (with coupon). 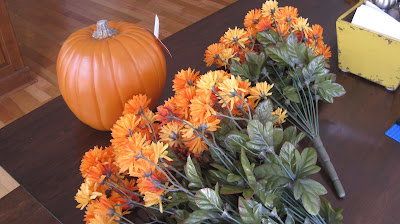 I also raided John's tool box for this tool (weapon) that he inherited from his grandfather.  I am not sure what to call it----just keep out of reach of children!! 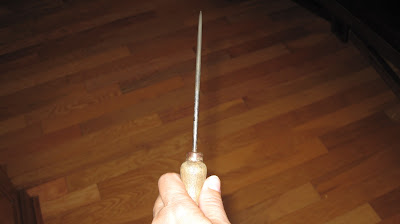 Then, I took out quite a bit of aggression and poked holes into the pumpkin.  Can we say Pumpkin Prozac!?!?!?  LOL!  I also found out the hard way that the tool got very hot!!!  Ouch! 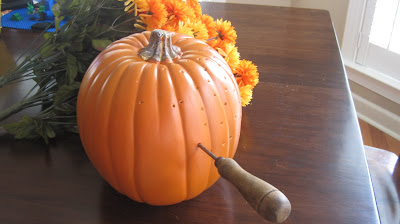 Next, I cut the mums from the stems, applied a small bit of hot glue and filled the pumpkins with mums.  No need to put any on the bottom as it needs a flat surface to sit properly. 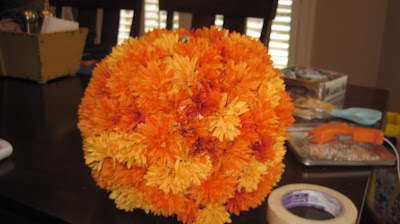 But I wasn't happy!  WHERE DID THE STEM GO?  The mums were so big, I couldn't see the stem!  That simply would not do!  I did a little quick thinking with an empty toilet paper roll and masking tape and fashioned a much bigger stem!  I applied a little paint and decided I was done! 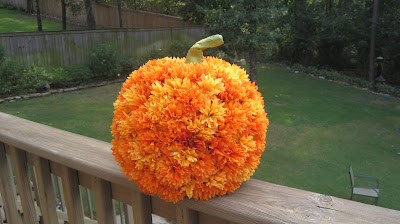 I love it!  It would make a beautiful center piece but I think it's going on our front porch----along with the other fake pumpkins!!!
Posted by Kennita at 11:02 AM No comments: 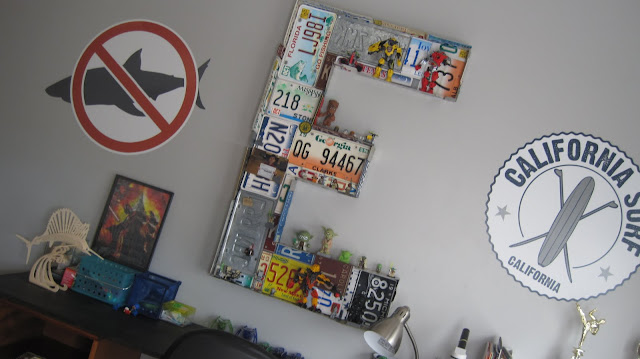 We have been working on a little update of Evan's room this summer.  He requested more shelf space to display his Lego creations and Yoda collection.  Of course, I couldn't simply go to Home Depot or Container Store and buy regular ready made shelves!!  Evan and I did some brainstorming and we came up with a great idea to use up old license plates that I had from a previous project.

Yes, I have changed the name of the blog!  Since both boys are in school now, I hope to have a little more time to create.  I have realized that I am not creating for any monetary aspirations but I do create to preserve my sanity!  I might sell some stuff from time to time but friends and family will reap the rewards of my efforts!  I want to be able to "sign" my pieces when I do give them away and decided the "Home Ecky Becky" was not 'me' enough.  After quite a bit of brainstorming and asking many opinions from my group of trusted advisors (you know who you are), we came up with "random.acts.of.KINDness" 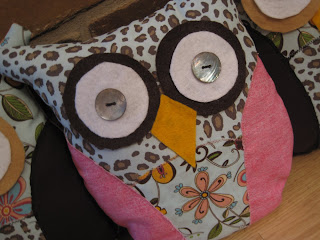 My niece, Kaylin, pledged Kappa Kappa Gamma last fall at the University of Kentucky.  Her experiences have certainly brought back many memories from my AOII days at Murray State.  The boys and I were very lucky to spend some time with Kaylin this summer and I would like to share one of the projects we did!  I will share another KKG project once Kaylin gets settled back in school and sends me some pictures-----hint, hint.....;)
One of the symbols of Kaylin's sorority is the owl.  We put our heads together and I made a mad dash to HoLo to pick up some cute fabric.  My mother, Kaylin, and I whipped up these precious little critters in just a few hours last week.  They are about 6 inches tall and so darling!! 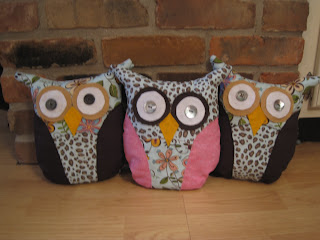 They may look like they are patchwork but they are not.  We simply cut the fabric in the shape we wanted and sewed the various prints on top of the main body of the owl.  We left the edges raw for a shabby chic feel.  The eye circles and beaks are cut out of felt and simply hot glued on!  My mom sewed the buttons on for eyes after Kaylin painstakingly went through mom's button stash for just the right ones!  (If anyone in Princeton needs a button, give Rita a call!!)  The buttons don't match but that is what makes them so unique! 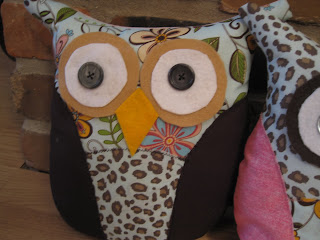 Kaylin will be getting a little sister in the next few days and one of these cute little "hootie-hoo's" will be moving into the dorm with her!  Color me jealous!!!!
Posted by Kennita at 12:11 PM 1 comment:

Jazzing up some floor pillows!!!

I had been looking for some floor pillows for the boys to lay on while watching tv downstairs.  Typically, they get in Tucker's dog bed and although he doesn't complain, I know Tucker doesn't like it!  I looked all over for some floor pillows and was shocked at the prices on some.  (But what did I expect with CB2, Ballard Designs and West Elm!).  However, I found some at.......of all places......Kroger!!!  They were about $15 each and I couldn't even make them for that!!  You can beat that price and they each came with a handle!!!

The boys thought they were perfect and Tucker breathed a huge sigh of relief!!  But I noticed they were a bit blah.  So, I raided my button stash and my mom's and purchased a few trendy buttons at Hancock Fabrics.  With a really long needle and 50 pound test fishing line, I added these buttons to jazz them up a bit!

Yes, you are seeing this correctly, none of the buttons match!  The boys thought they were pretty cool and I did too!  So, if you have any pillows that are lacking some jazz, just add some fun whimsical buttons!!!
Posted by Kennita at 7:39 AM No comments: